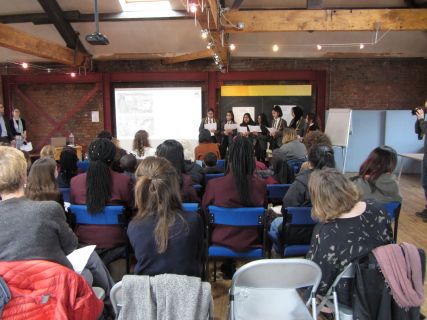 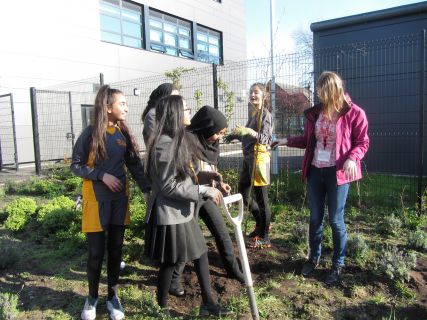 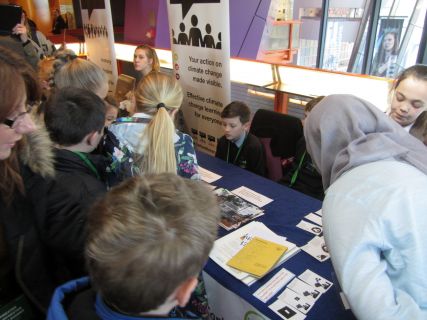 MEEN works with young people to help their voices be heard on climate change and to support them in taking positive action. However, we also understand the need to engage with whole-school communities for young people to be able to take effective action: pupils may plant trees, campaign to save energy or walk to school but to reduce a school's carbon footprint everyone needs to be involved.

To support this aim we also create opportunities for intergenerational learning which enables school Eco Teams to share their learning and ideas on climate change with adults, whether with school staff, parents, grandparents or the general public.

St Peter's High School pupils created a very informative voice-over ppt presentation to explain the actions they have taken and what they would like to see in the future for their school community. It has been created in order to continue to share ideas and activities between schools even during lockdown. Click here to view this valuable resource.

St Peter's High school pupils ran an event all about climate change for pupils from St Richard's Primary; planted trees in the school grounds; contributed to MEEN's Intergenerational Climate Change Conference; set up and ran an energy monitoring system in school; ran a Carbon Classroom in the University of Manchester Student's Union; ran a session on teaching climate change for trainee teachers at Manchester Institute of Education whilst also giving a key note speech at their conference and ran a workshop for Manchester City Council's Youth Summit on climate change . For the full case study click here.

MEA Central's eco team working with the University of Manchester and a two Brazilian schools on a social cartography project mapping the potential impacts of climate change on their community whilst also considering possible solutions. They shared their work by doing a key note at MEEN's Intergenerational Climate Change Conference; they ran MEEN's stall at Manchester City Council's first Youth Voice conference; planted trees in their grounds and contributed to UCL's Children's Rights conference. For the full case study click here.

As a part of our Intergenerational Climate Change project Bowker Vale Primary worked alongside pupils from Our Ladies High to deliver a 'Carbon Classroom' as a part of Manchester Museum's 'Climate Control' exhibition.  Pupils talked to a range of adults from international meterologists, trainee teachers, University of Manchester staff and members of the public about the issues and received very positive feedback on their knowledge and understanding.

MEEN worked with twelve schools supporting them so they could run the Carbon Classroom in the Arndale Centre. Working in partnership with Cooler, the stage was set for pupils to talk about their concerns and share their knowledge with the general public. There were a host of important visitors to the classroom including Councillors, MPs, MEPs and plenty of shoppers willing to listen, learn, be tested and share their knowledge. From feedback pupils reported the experience was both challenging and rewarding: they were pleased to be able to impart knowledge but also surprised that some adults knew so little.

Pupils at St Philip's Primary School in Hulme were keen to have their voices heard at the COP 21 Climate Change negotiations in Paris. So with support from Manchester Museum this film was made to be taken to Paris:

Working in partnership with the Diocese of Manchester MEEN enabled young people to have a voice at an event at Manchester Cathedral. The aim was for the Dean of Manchester to share information with staff and young people from 25 schools across Greater Manchester and the congregation about the cathedral's new geothermal heating system. Then pupils from Canon Burrows Primary in Tameside, St Michael's Primary in Trafford, St Philip's Primary and Armitage Primary from Manchester shared their findings on climate change with the audience. Their presentations were well-received.

A variety of organisations also attended the event and ran workshops for the young people in the cathedral: they learned about the cathedral's bees, visited the new boiler system in the cathedral's cellar, found out about the benefits of walking to school, growing their own and the impacts of flooding amongst other things.

As a part of this project the pupils had also learned about the need to divest from fossil fuels by playing a MEEN generated game which created a lot of excitement and a lot of learning!

Through the year 2012 - 2013 MEEN worked with 11 school communities on Climate Change. Each school chose a different route, appropriate to their school community, their needs and priorities. Some pupils gave up their lunch-times and golden time to deliver the project, others met after-school, some Eco Clubs included parents or members of school staff, whilst others worked in class time.

Every school has done something wonderful to help their own communities grapple with the issues and the problems of Climate Change and six schools took a lead at the Carbon Classroom in the Arndale Centre where pupils helped educate the public. Some pupils have excelled in their confidence, others in their speaking and listening skills and they've all gained a much better understanding of the issues facing the planet in the future.

Here is a selection of case studies from some of the schools that have been involved:

What is Carbon Literacy?

Manchester Carbon Literacy project aims to work with every Manchester citizen offering them a day's training to learn about Climate Change. This very ambitious project is the first of its kind in the world and  aims to create a 'low carbon culture' by working with communities, workplaces and educational establishments.

To gain a certificate in Carbon Literacy participants have to meet certain criteria around their knowledge, values and actions and the training must be relevant to local issues, be delivered by peers, use methods of group enquiry and help encourage positivity in the face of pending catastrophic Climate Change.